I never thought I'd watch a 25-minute video of a guy playing Sudoku, but here we are
Read the whole story

reply
Same... Not your ordinary Sudoku though.
Netherlands

Tea is big business. Not only is it the most consumed drink on the planet after water; but its production and processing contribute to four Sustainable Development Goals – the reduction of extreme poverty (Goal 1), the fight against hunger (Goal 2), the empowerment of women (Goal 5) and the sustainable use of terrestrial ecosystems (Goal 15).

In 2019 the United Nations adopted May 21 as the day to draw worldwide attention to the global tea market and rightly so considering the immense impact of international tea trade on growers, consumers and the global economy. In addition to the health benefits of tea – its antioxidant and anti-inflammatory qualities; production and processing of the Camellia sinensis plant form a major source of income for smallholder farmers and a source of export revenue for some of the world’s poor countries.

International Tea Day aims to increase public awareness of sustainable production and consumption of tea; its importance in fighting hunger and poverty as well as improve the tea value chain. On this inaugural International Tea Day, CABI is honoured to celebrate the smallholder farmers we work with through countries with the systems and economies that rely on the production and commercialisation of tea to thrive.

For example, CABI supported the Cibuni Tea Estate in Indonesia where we helped advance sustainable solutions to pest and disease problems building on our expertise in Integrated Crop Management (ICM). Here pests which threaten production include looper caterpillars (Biston supressaria) and tea blister blight (Exobasidium vexans Massee). Similarly in India, we worked with Unilever to review existing crop protection practices and limitation to current techniques to develop a road map to steer the tea industry towards the use of less pesticides. In collaboration with the Tea Research Association, through its technical wing of Tocklai Tea Research Institute, United Planters Association of Southern India, and key industry partners, both lab and field-based research was undertaken. The impact on pest and natural enemy populations, yield and the associated cost were all assessed and the results were presented in a toolkit of best non-chemical management strategies.

A CABI research study led by Carol Ellison was instrumental in determining that classical biocontrol of tea weeds offers a cheap, pollution free, proven and sustainable method for their management. For instance, using a coevolved rust fungus Puccinia spegazzinii as a biocontrol agent for the ‘green tidal wave’ Mikania micrantha, an invasive alien tea weed ravaging the Assam tea growing region of India. In 2005 this rust was officially released in India as the first ever pathogen to be introduced into this country, with subsequent releases in other countries in the region including China.

Furthermore, through a partnership to enhance coverage of tea, CABI databases and the Tea Research Institute of the Chinese Academy of Agricultural Sciences collaborated to exchange information on tea, thereby expanding coverage of CAB Abstracts and Global Heath on tea, particularly from China – the largest tea producing country in the world with more than 2.5 million tonnes produced per year. This partnership also facilitated world-wide dissemination of Chinese research on tea. CABI’s two databases boast a coverage of 36,171 records on tea related literature. The Tea Research Institute is located in Hangzhou, China, which produces Dragon Well (Longjing) tea, mostly by hand and renowned for its high quality, earning it the China ‘Most Famous Tea’ title.

Interestingly, per capita consumption of tea is relatively low in tea-producing countries, signifying a need to increase demand. As a cash crop, tea is helping to reduce poverty and bring about food security in producing countries. Having led the campaign to promote International Tea Day, Chinese Ministry of Agriculture and Rural Affairs, with which CABI has a main Joint Lab in Beijing and European Lab in Switzerland, is organising a series of celebrations including on-line seminars to raise awareness in China and beyond.

So, the next time you take a sip of your favourite brew also spare a thought for the threats your drink faces in light of our changing climate. Tea production requires some strict adherence to unique agro-ecological conditions and changes in climate present a threat to tea quality, incomes and rural livelihoods – a situation that may be managed if tea-producing countries integrate climate change adaptation and mitigation policy into their national tea development strategies. jlvanderzwan
(caveat: the triune brain model on its own is very outdated, but one could replace it with up-to-date neuroscience models without changing much of the overal narrative) 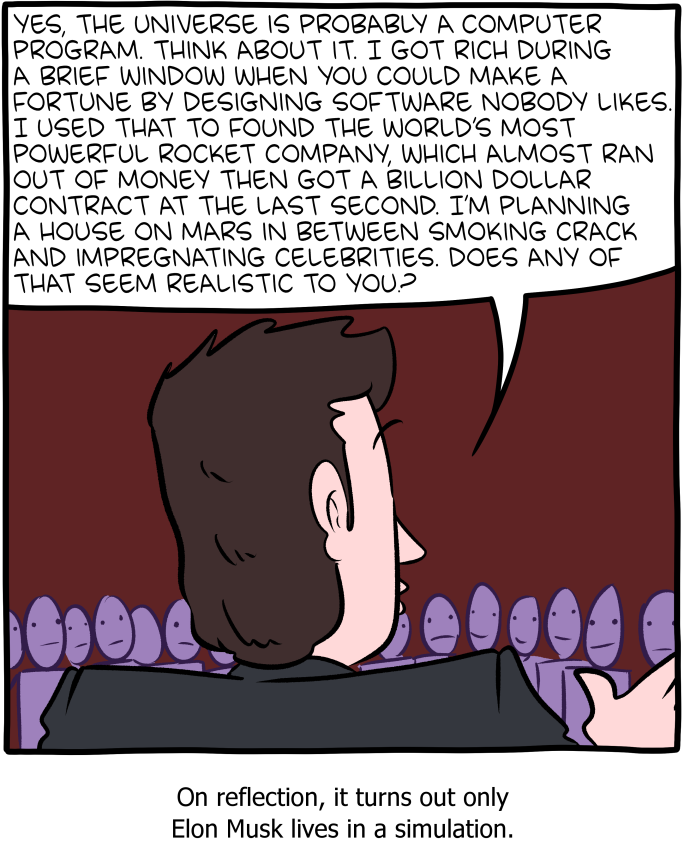 Hovertext:
That wasn't lazy drawings in the background - the sim just hadn't fully rendered them.

jlvanderzwan
reply
Full of yourself and empty, surely?